Mitsubishi UFJ Morgan Stanley Securities (MUMSS), which operates under Japan’s largest financial group, and Morgan Stanley MUFG Securities (MSMS), which is a foreign-capitalized securities firm with extensive global network and strong track record and capabilities, collaborate closely and offer unprecedented financial services to the clients. By doing so, we aim to become the most trusted companies in Japan’s securities industry.

While the investment banking operations are integrated into MUMSS, each company has its own global capital markets, sales and trading and research functions. MUMSS and MSMS keep these businesses separate in order to leverage each company’s unique value propositions and strengths, while the two companies are pursuing other areas of cooperation. We believe this two-company structure is the most effective business model to optimize the two companies’ ability to leverage their respective capabilities and provide our clients with the best possible service. In addition, MUMSS offers services to its retail customers.

Mitsubishi UFJ Financial Group has an extensive client network well-balanced in Central, East and West Japan which consists of approximately 650 locations throughout Japan.

We cater to increasingly sophisticated and diverse financial needs of our clients effectively and swiftly by leveraging our useful and abundant intelligence, proven track record and expertise that can be offered by the combined capabilities of MUFG and Morgan Stanley. 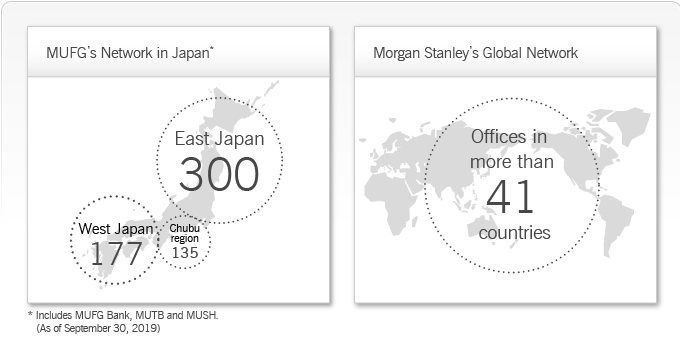 Through the cross-shareholdings and by sending officials as each entity’s management members, MUMSS and MSMS are strongly bound together.